Wells County’s growing - but not by much

Wells County is one of only 39 Indiana counties to have gained population in the past year, according to figures released Wednesday by the U.S. Census Bureau. 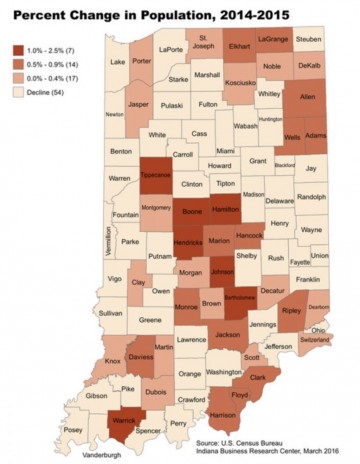 Eight Indiana counties — LaGrange, Tippecanoe, Boone, Hamilton, Hancock, Hendricks, Johnson, and Warrick — grew more than 1 percent, while 13 grew between 0.4 and 0.9 percent. Included in that latter group are nearby counties Adams, Allen, DeKalb, and Kosciusko, all of which are part of the Northeast Indiana Regional Partnership.

The only other county in northeast Indiana to gain population was Whitley, which — like Wells — is in the less than 0.3 percent growth tier.

Chad Kline, Wells County’s economic development director, said that Wells County needs to have a 2.1 percent annual growth rate as its part of the Road to One Million effort.

Kline said the focus has to be on the “millenials” — those who are 18 to 24 years of age and figuring out their futures.

“We need to do a better job of retaining those people,” Kline said.

The census numbers released Wednesday were analyzed by the Indiana Business Research Center at Indiana University’s Kelley School of Business.


Article by Dave Schultz, Courtesy of the News-Banner