‘Together, we are stronger’

There were equal parts of astonishment and camaraderie on display Friday afternoon as the Parlor City Plaza was formally opened for the Bluffton community’s use and enjoyment.

The project is not yet completed — construction equipment was moved off the plaza onto West Market Street for the ceremony — but a crowd of approximately 250 people routinely applauded and cheered amid the speeches and the ribbon-cutting ceremony.

The plaza expands what was a small area in front of the Wells County Courthouse. The open space now extends to the west where the Centennial Block building stood for many years.

Words like “a great day for our community,” “amazing project” and “momentous occasion” were spoken, and no one found any hyperbole in them.

Mike Lautzenheiser, the president of Bluffton NOW! (for new, old, wonderful), was singled out for a particular honor as a tree will be planted in his honor. Lautzenheiser’s leadership was considered a key factor in the fact that the plaza went from a concept to reality.

Bluffton Mayor Ted Ellis read a poem written by Edgar Guest in 1918 titled “It Couldn’t Be Done.” Among the lines in the poem was: “It couldn’t be done — but he did it.”

Lautzenheiser thanked the many members of the community — a good-sized crowd was on the stage when the ribbon was cut — who participated in seeing the project through to completion.

Lautzenheiser made note of the donations given to the project by the foundation, which bought the naming rights to the plaza for $175,000, and the Rotary club, which purchased the naming rights for the plaza’s stage and put $110,000 into the project. He also credited the RDA, which Donaghy — a Wells County resident — serves on. The final $200,000 came from a pool of money the RDA had control of that put the project over the top.

Lautzenheiser also credited Prible for her leadership in the early stages of the project. When she took the stage, she read a quote from Margaret Mead: “Never doubt that a small group of thoughtful, committed citizens can change the world. Indeed, it is the only thing that ever has.”

Prible paused for effect, and then continued. “And here … we … are,” she said, emphasizing each word. “Together, we are stronger.”

The grand opening ceremony was held in breezy conditions, but it was finished not long before a soaking rainfal 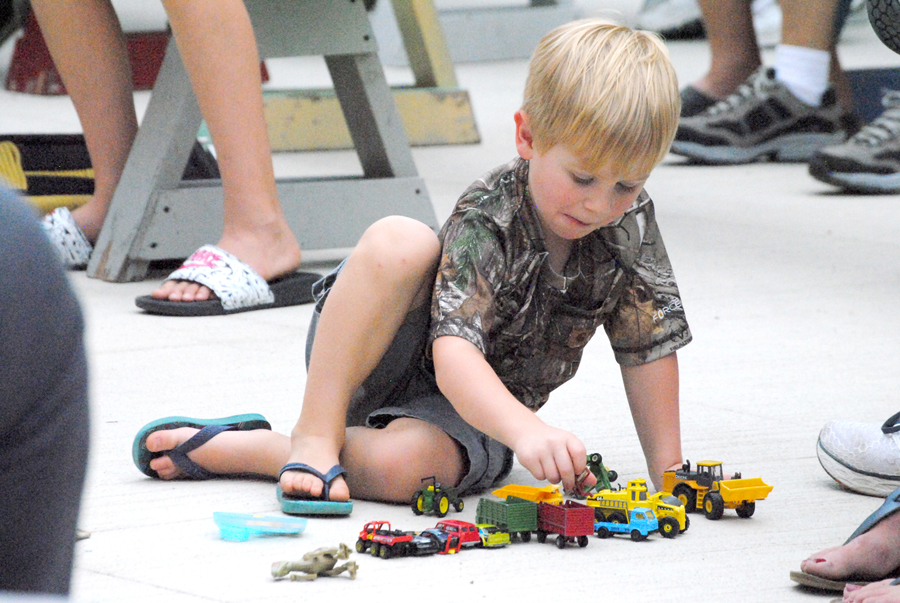 The major item that still needs to be completed is the opening of the main entrance to the Wells County Courthouse. It had been expected that work would be completed, but it was not done in time for Friday’s ceremony.

Construction crews were working through early Friday afternoon, when the lift truck was parked off of the plaza and benches were brought in to accommodate the crowd.

Story by Dave Shultz, Photos by Jessica Bricker; Courtesy of the News-Banner