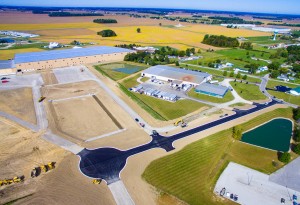 Wells County Economic Development Director Chad Kline’s report from activities in 2019 has been upbeat and positive.

Kline was before the Ossian Town Council last week presenting his report since the council is one of the funders of economic development.

In 2019, Kline explained, there was $99.4 million in new investments by businesses and industries in Wells County. Twenty-eight new jobs were generated with an annual new payroll of $1 million.

“That is up about $30 million from the year before and about double from 2017,” Kline said.

Far and away the largest investment came from American Axle and Manufacturing in the Jasun Industrial Park in Bluffton. American, a Tier 1 manufacturer of drive line and drivetrain components  spent $74 million on new equipment to make parts for General Motors and Ford vehicles. The company received a 10-year tax abatement from the Bluffton City Council on the eqippment in August.

Midland LLC, a large warehousing facility located on West Lancaster Street on Bluffton’s far west side is putting $8 million into a 200,000-square-foot addition to its facility.

The Bluffton Redevelopment Commission, which is composed of members of the Bluffton Common Council, is using the Adams Street Tax Increment Financing district for a bonding mechanism that will allow Midland to receive approximately $840,000 in repayment of property tax revenues collected from the project for the repayment of a bond obtained by Midland, Kline explained.

•  $514,000 for manufacturing equipment by Haven Manufacturing, located along Ind. 1 at 700N south of Ossian. The investment is expected to add two new jobs.

• $440,000 by Perma Column of Ossian for a robotic welder, a CNC horizontal bending machine and a stamping die. The investment is expected to add two new jobs.

“We’ve also seen a lot of commercial investment going on. This also doesn’t take into account the major investment that Valero is putting into the former Great Plains facility since they’ve purchased it,” Kline said.

“We know that we’re well over $100 million invested in Wells County in 2019, which is pretty remarkable,” he added.

During the year Kline conducted more than 100 visits with existing businesses and industries in Wells County to discuss expansions, program alignment, logistics and retention challenges. He also received 55 site leads and submitted 15 responses for information of current qualified available sites. Kline explained the 15 responses is an increase from the past couple of years. A lot of the companies out there that are looking for sites are looking for larger existing buildings. A lot of towns across the state have bare building sites, but few have existing buildings ready to be occupied.

“Unfortunately we haven’t seen much action from the site leads we’ve submitted but we have from the building leads,” Kline said.

“Fifty-five health science education students toured the Haven manufacturing so that they could see the manufacturing side of medical devices,” Kline said.

“Unemployment continues to decline, however our employment level is still not where it was in 2016,” Kline said. “It dropped in 2017 and we’ve been moving up ever since,” he added.

The unemployment rate in Wells County started 2019 at 3.5 percent and then rose to 3.6 percent in February. It rollercoastered through March, May and July and bottomed out at 2.1 percent in September before ending the year at 2.6 percent.

“Our unemployment levels may look good in the newspaper but are terrible if you are trying to run a business and are looking for quality employees,” Kline said, intimating that once unemployment levels reach that low, it means the remaining unemployed are usually, for whatever reason, unemployable.

Wells County’s Real Gross Domestic Product for 2019 is $1.063 billion, Kline explained, a 6.3 percent growth from 2017 to 2018 making it the highest percentage growth in the Northeast Indiana Region. The county had the 12th best GDP growth in the entire state.

“Not only are our companies investing, but they are doing very well,” Kline said.

Also from 2017 to 2018, the county retained and gained more residents than it had in years past, seeing a positive growth of 196 residents during that time period.

Most of our population increases have been because more people have been born in the county than have died, however in  the past two years we’ve seen overall population growth.

“One of the biggest issues is a lack of lots available to build,” Kline said.

Kline sees the rural home starts catchup to the urban home starts as a troubling trend. “Honestly that’s kind of a problem. We want to see concentrated housing growth in the urban areas so that urban sprawl doesn’t happen,” Kline said.

He also laid out projects for WCED for 2020.

“Workforce availability remains a serious issue for Wells County employers in 2020,” Kline reiterated, “But Wells County Economic Development continues to work on efforts that will promote the community as a place to maintain and start a new residence.”

Projects that are currently underway or in planning for 2020 are:

• Identify and prepare available land for housing development that will create additional product for an entry-level workforce.

Other projects that WCED has planned for 2020 include:

• Continuing an aggressive effort toward business retention and expansion visits with Wells County industries to identify needs and opportunities.

• Serve in a leadership capacity to develop a brand identity for Wells County marketing efforts.

Story and photos by Glen Werling; Courtesy of the News-Banner