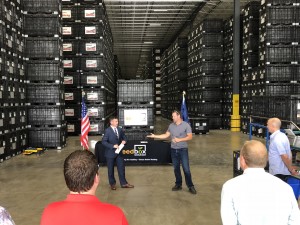 Seedbox Solution celebrated its relocation Monday to the county’s former “spec” building at Adams and Lancaster streets on the city’s west side.

Wells County Chamber of Commerce Executive Director Erin Prible said she is excited about the new business in Wells County and that the space is now occupied.

Matt Dannenfeldt, CEO and founder of Seedbox, who started the company more than three years ago, said the company first came to Wells County last year. He said the company provides services and products around packaging needs for the seed industries.

Seedbox initially operated out of the old Red Gold plant near Wiley Avenue and Bond Street until they couldn’t make it work anymore.

“We quickly outgrew that,” Dannen-feldt said. “It was very clear we needed more space.”

They solidified contracts and started fresh in the new location in April. The Lancaster Street facility is the company’s No. 1 location, Dannenfeldt said, and here are plans in the works to open two other locations similar to the Bluffton facility, as well as to add more space to the current location.

Dannenfeldt spoke on three aspects as to why the company picked Bluffton: geographically, it’s a good location for Seedbox’s customer base; the availability of the commercial warehouse space at a good rate; and labor and employment locally.

“We felt good about our ability to draw from a good labor pool here,” Dannenfeldt said, “and build a good team.”

Many of the employees at the celebration Monday have been with the company since the first day, Dannenfeldt said, adding there’s been low turnover.

The warehouse will receive 35,000 to 38,000 boxes during “the return season” — after planting and before harvest. The boxes are then inspected, cleaned and repaired for the harvest season.

They have 10 full-time employees on location but more employees are used out in the market during busier times for cleaning services.

Congressman Jim Banks, R-Indiana, was on hand for the open house. He said he enjoys being part of announcements like the one Monday. He said Wells County is a collaborative community that wants to create new jobs and growth.

“The American dream is only as strong as our job creators are in our local economies throughout the district,” Banks said. “Your investment here means more jobs, more opportunities for Hoosiers in our part of the state.”

Banks talked about economic growth on the national level, noting the country’s unemployment rate is as low as it has been since December 2000.

Meanwhile, Banks said his district has the most manufacturing jobs per capita of any district in the country.

Seedbox is included in that investment into the region, Banks said.

The Wells County Commissioners approved funding of the “spec” building in January 2014 in a move that was described as “unique” to the region and estimated to cost $5 million. About two years later, it was announced 100,000 square feet of the structure was filled as a warehouse for Peyton’s Northern.

“It really is a pleasure to be here,” Dannenfeldt said. “We’ve really enjoyed the opening and we’ve had wonderful support from a number of people in this room ... We’re really grateful. It’s a cool place to be.”