An artist’s conception of the Wells County Creative Arts Council’s proposed Performing Arts Center was shown to the public Saturday night during the CAC’s annual fundraising auction at the Arts, Commerce, and Visitors Central. (Image courtesy of Elevatus Architecture)

The leadership of the Wells County Creative Arts Council set forth a proposal for a Performing Arts Center during the CAC’s annual fundraising auction Saturday night.

Artist conceptions of the proposed performance venue were displayed as Janiece Lipsey,  the CAC’s executive director, and Ted Smith, the president of the CAC’s board of directors. outlined the plans and presented the case for a stand-alone building dedicated to the programs of the Creative Arts Council.

The building has been designed by Elavatus Architecture of Fort Wayne. The estimated cost will be between $9.5 million and $10 million. It will have a 600-seat auditorium, rooms for dance and music lessons, a lobby that can double as a gallery,

Lipsey said the current building, erected in 2004, has served the CAC well but the programs offered by the council have reached the limits of what the available space at 211 Water St. can hold.

“We have outgrown our current facility,” Lipsey said. There is no true performance venue, the dance classes are near capacity, and there is a lack of dedicated art studios and classrooms.

“We don’t have a space where we can drip paint on the floor,” Lipsey said.

Also, right now, when Wells Community Theater — which is now under the CAC’s umbrella — wants to put on a larger show, it has to rent the Bluffton High School cafetorium or the Norwell High School auditorium. When WCT put on “Mary Poppins Jr.” this past summer with nearly 50 performers, there was no space to rehearse in the current building.

The dance recitals have to be performed off-site as well.

No site has been acquired for the building, but the CAC’s leadership hope that some land can be found in or near the downtown area. 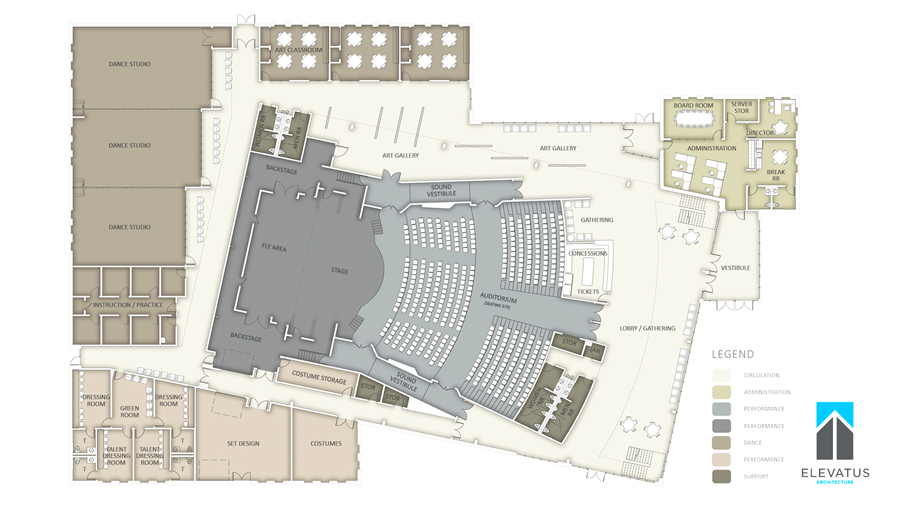 This floor plan of the proposed Performing Arts Center shows a 600-seat auditorium in the center, offices and board room at top right, classrooms for art classes across the top, and spaces for dance and music classes on the left. Dressing rooms will be in the lower left, with the larger spaces at the bottom holding work areas for set construction and costumes. (Image courtesy Elevatus Architecture)

Smith said the emphasis would be to make the structure a community building. When it is not being used for a CAC production, he said, it could be used as a venue for meetings, conferences, and other gatherings — including, if there is an entrepreneur willing to work with the Creative Arts Council, display of first- or second-run movies.

“If we could bring people in with a movie, then we could tell them, ‘Come back next week for a live performance,’” Smith said.

Smith also addressed the idea of raising money. He called the audience’s attention to the artist’s conception of the building on the video screen and brought up the idea of naming rights.

“We will put anyone’s name where it says ‘Creative Arts Council,’” he said. “I don’t have a problem with that.”

A dinner of stuffed baked potatoes followed the presentation about the Performing Arts Center. That was followed by the annual auction which was emceed by Bluffton Mayor Ted Ellis with Jody Hollowell as the auctioneer.