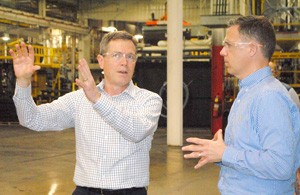 Congressman Jim Banks (IN-03), shined a light on 20/20 Custom Molded Plastics and their use of the new federal tax reform during a visit to the factory in Bluffton Thursday.

Banks took a tour of the facility before his Town Hall meeting at the Arts, Commerce and Visitors Centre and met with 20/20 leadership at the facility.

“In part because of tax relief provided by the new law, 20/20 increased the hourly wages of their employees by 50 cents per hour, equivalent to more than $1,200 annually for full-time workers,” the company said in a press release Thursday.

The company has a $20 million expansion underway at its Holiday City, Ohio, location. It will add a 140,000 square foot building and a 6,600-ton high pressure injection molding machine, the release also said.

In Bluffton, $13 million is being invested in new equipment, and the company is, according to the release, “looking at a new state-of-the-art manufacturing facility in Bluffton as early as 2019 because of tax relief from the new law.”

Later, at the Town Hall meeting, Banks acknowledged that members of the company’s leadership were in attendance.

Banks said the tax cut was passed at the end of the year and they are continuing to see positive news from that. At first, major national companies announced their employees were getting raises with the tax reform, but now the news hits home at places like 20/20.

“What a great story they have to tell as a local business,” he said.

When he asked the 20/20 representatives if the raises applied to all employees, they nodded yes.

The reform is showing the economy is growing, he said, and he’s also hearing how it is affecting workforce development.

“As a business owner, our job is to grow the business, which includes investments in our people and the equipment and systems to make them successful,” 20/20 Treasurer David Rupp said in the release. “We understand that to pay for these investments requires after-tax dollars and the tax relief we received in the tax legislation provide the additional resources to accelerate our investments in our employees’ and 20/20’s future.”

Banks was criticized for tax relief with the argument that most of the tax relief affects the country’s wealthiest. But Banks pointed to a chart that appeared to indicate those most affected by the relief are those in the middle class — and that Hoosiers in northeast Indiana should see, by year’s end, about $2,000 extra in pay due to the tax cuts.

Photo Info: Rick Singer of 20/20 Custom Molded Plastics, left, talks with Congressman Jim Banks (IN-03), on the factory floor Thursday afternoon in Bluffton. Banks recognized the company for its use of the federal tax reform to give all of its employees raises. (Photo by Jessica Bricker)


Article by Jessica Bricker, Courtesy of the News-Banner